Delaware Valley University is proud to serve veterans and military members who have or are currently serving our country.

At DelVal we pledge to help advance your military career or prepare you to transition into the civilian arena through one of our undergraduate or graduate degrees or certificate programs. In addition to providing personal attention to our service members, we want to assure you that special care is taken of the sons and daughters of our veterans who are using Post-9/11 veterans’ benefits. The University welcomes military students who use tuition assistance. Please visit the below link for detailed guidance on applying for TA.

We have a specially trained staff devoted to military and veteran students and the processing of their academic and financial benefits, allowing service members and veterans to focus on academic goals. Our staff is expert in processing Federal Tuition Assistance, Post-9/11 veterans’ benefits, and other VA educational benefits. 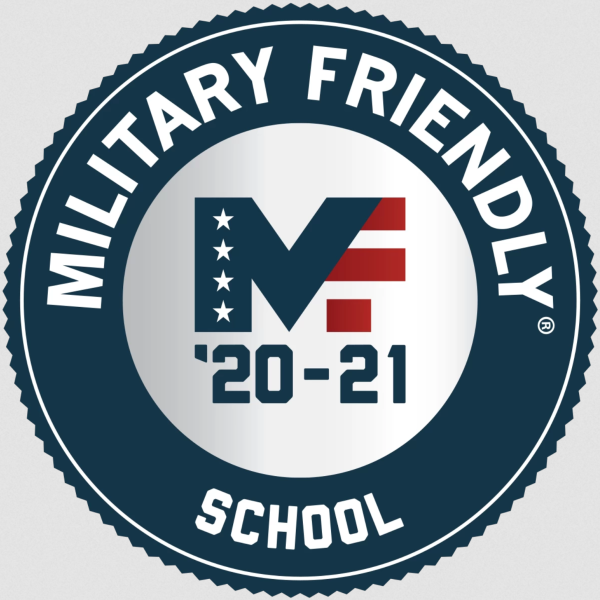 The Military Friendly® Schools survey is the longest-running most comprehensive review of college and university investments in serving military and veteran students.

Learn more about the organization
Important Information and Links

The Delaware Valley University MSA Scholarship Program is available to military personnel who are either on active duty or are serving as a monthly drilling reservist. This program is offered only to part-time undergraduate or Master’s level graduate students who have applied and been accepted to the school and are pursuing a degree program. The Program is not open to full-time undergraduate students or to students in the Doctor of Education in Educational Leadership program. Students who are using the Post 9/11 veterans’ benefits or VA Chapter 31 (Vocational Rehabilitation Program) are eligible for this program only when their VA educational benefits under these programs have expired.

To qualify for a Military Scholars for American Program?

Delaware Valley University participates in the VA’s Yellow Ribbon Program. The Yellow Ribbon Program was established by the Post-9/11 Veterans Educational Assistance Act of 2008. This program allows colleges, universities, and other degree-granting schools in the United States to voluntarily enter into an agreement with VA to fund tuition and fee expenses that exceed the tuition and fee amounts payable under the Post-9/11 veterans’ benefits. Veterans’ benefits allows you to earn any of our offered degrees.

Visit the Department of Veteran Affairs website to learn more about the Yellow Ribbon Program.

The Janet Manion Military and Veterans Center at Delaware Valley University was built to honor the memory of Janet Manion and the crucial role that she played in creating the Travis Manion Foundation.

The center, which is located in Elson Hall on the University's main campus, is a gathering place for student-veterans and military members, offering personalized services to fulfill each veteran’s needs. It is a place for veterans, military personnel and their dependents to relax with people with shared experiences between classes, get help with paperwork for educational funding, and get support from staff and peers. Staff at the center provide counseling and college advising to include registration and financial aid.

The center also houses the staff of Military and Veterans Affairs. The Janet Manion Center provides a private space for military members and veterans, with a dedicated lounge and meeting area, serving as a place for assembling for programs, relaxation, and building peer relationships.

About the Travis Manion Foundation
About Janet Manion

Delaware Valley University is experienced in administering TA for military students who elect to use that education benefit to pay for their courses. The University accepts military TA payments for part-time students in our undergraduate and post-graduate school of Continuing and Professional Studies. TA may not be used for our Physician’s Assistant or Ed.D Educational Leadership programs.

The following summarizes the basic steps for arranging for your TA education benefits:

For your information and convenience, please find below each service’s TA website. They are an excellent source of information.

All staff members are fully trained in the administration of Title IV Aid.

Institution’s Policy on Return of Unearned TA Funds to the Government
Return of Tuition Assistance: Military Tuition Assistance (TA) is awarded to a student under the assumption that the student will attend the school for the entire period for which the assistance is awarded. When a student withdraws, the student may no longer be eligible for the full amount of TA funds originally approved. To comply with the new Department of Defense (DOD) policy Delaware Valley University will return any unearned funds on a prorated basis through at least 60% portion of the period for which the funds were provided. TA funds are earned proportionally during an enrollment period with unearned funds returned based upon when a student stops attending.

The University does not presently require access to a military base in order to conduct courses for military students who use TA. All TA students either take courses at our main campus or take the course via online delivery.

Should in the future, the school require access to a military base the below procedures will apply.

All 56 states and territories are currently compliant with REAL ID or non-compliant with an extension. The residents from these states and territories may continue using their driver’s licenses or identification cards, regardless of whether the license/ID is REAL ID compliant or not, for accessing Federal facilities (including military bases), entering nuclear power plants, and boarding commercial aircraft.

Residents from a state/territory that is compliant with REAL ID or non-compliant with REAL ID, but has received an extension may continue to use their current state/territory-issued driver’s licenses and identification cards, regardless of whether the card is REAL ID compliant or not, for accessing federal facilities, including military bases. This is what we call “state-based” enforcement. Only the state that issued the resident’s license/ID must be either compliant or have been granted an extension in order for that resident to use that license/ID for accessing Federal facilities. The license/ID itself does not have to be REAL ID compliant until “card-based” enforcement begins on October 1, 2020.

Starting October 1, 2020, every state and territory resident will need to present a REAL ID-compliant license/ID, or another acceptable form of identification, for accessing Federal facilities, entering nuclear power plants, and boarding commercial aircraft. This is what we call “card-based” enforcement. The card, itself, must be REAL ID-compliant unless the resident is using an alternative acceptable document such as a passport. The Act does not require individuals to present identification where it is not currently required to access a Federal facility (such as to enter the public areas of the Smithsonian) nor does it prohibit an agency from accepting other forms of identity documents other than documents from non-compliant states (such as a U.S. passport or passport card).

Acceptable alternate forms of identification that may be used in conjunction with a state driver's license to potentially gain access to the installation are:

Contact our certifying officer Joseph Grato to receive detailed instructions on what steps you should take in order to apply to the program, have your military training evaluated for college credit, and to utilize any military benefits you may be eligible to receive. These benefits can include federal tuition assistance or state funding.

Yes. Delaware Valley University awards college credit for training that has been evaluated and recommended by the American Council on Education. To request an official evaluation of your military training for college credit, please have your official transcripts sent to:

Contact our certifying officer Joseph M. Grato to receive detailed instructions on what steps you should take in order to apply for Federal Tuition Assistance.

Only individuals entitled to the maximum benefit rate (based on service requirements) may receive this funding. Therefore, you may be eligible if:
• You served an aggregate period of active duty after September 10, 2001, of at least 36 months;
• You were honorably discharged from active duty for a service-connected disability and you served 30 continuous days after September 10, 2001;
• You are a dependent eligible for transfer of Entitlement under the Post-9/11 veterans’ benefits based on a veteran’s service under the eligibility criteria listed above.

To begin utilizing these benefits, you must first complete certain VA paperwork before enrolling in classes. Please click on the applicable benefit listed below and follow the guide provided: