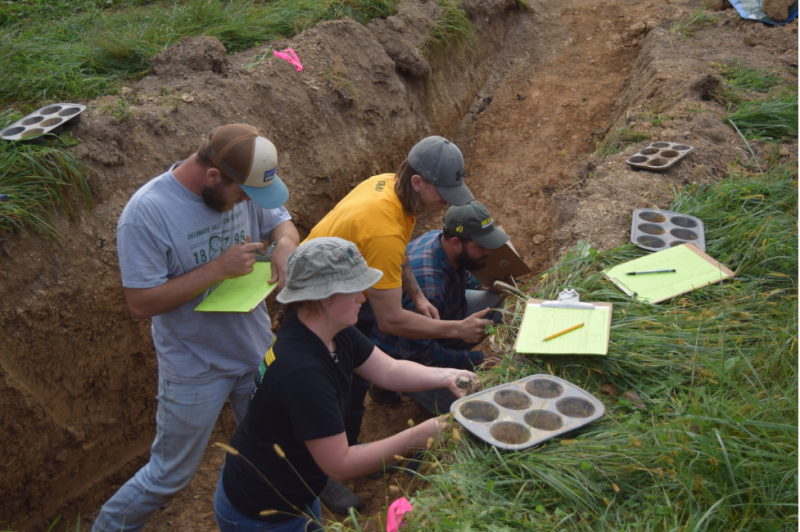 On Friday, Oct. 15, the soil judging competition brought together 63 students from eight schools.

Students practiced their soil judging skills by competing individually and in groups. The students were judged based on their skills in soil analysis. They worked in soil pits that were dug at Rodale Institute, in Kutztown, Pennsylvania, collecting and analyzing soil samples.

The top individual finisher was DelVal student Mitchel Johnson ’22. He is the first DelVal soil judger to win the NE Regional Contest since 2010. Placing third was DelVal student Gabrielle Landis ’22. Penn State won the Group Judging portion of the competition, with DelVal finishing second. Overall, the University of Rhode Island won this year's contest, edging out DelVal, followed by the University of Maryland and the University of Delaware. These four schools have qualified and will advance to the Spring 2022 National Contest, which will hosted by Ohio State.

The DelVal soil judging team, The Augering Aggies, is coached by Steve Dadio.

“We don’t always think about what’s underneath our feet,” said Dadio. “Competing in soil judging gives students a greater appreciation for soils and a better understanding of the industry.”

Many of the students on the soil judging team are planning to pursue careers in agriculture and environmental science.

“It’s a great opportunity to get out into the field and see what we’re learning about in the classroom in real life,” said Gabrielle Landis ’22, a DelVal environmental science major.

Students who participate in soil judging get to work in a group with people with shared interests while gaining skills many employers in the field value.

“I think it’s good experience for my future and, it’s also just fun,” said Shannon Petrillo ’22, a DelVal environmental science major. “I like being able to interact with a group.”

This year, the pits were monitored by DelVal soil judging team alumni. DelVal alumni timed the students and provided directions at each pit.

Heather Stellabott ’20, a DelVal environmental science alumna, served as one of the pit monitors. Stellabott is currently a soil conservationist with the USDA in Lebanon County, Pennsylvania.

“Soil judging helped me immensely when I started my career,” said Stellabott. “The skills you gain are very practical. Coach Dadio always did a great job of showing us how what you did in the competition applied to the real world. I think everyone in the industry should get into a soil pit at least once. It just helps to put you ahead in your career.”

Stellabott was excited to have an opportunity to work with current students.

“Seeing people developing a passion for soils and enjoying the competition and, having a chance to come back and work with Coach Dadio is amazing,” said Stellabott. “Soil judging is one of the most relevant hands-on experiences students can have in environmental science.”

The following DelVal students represented The Augering Aggies, the DVU Soil Judging Team, at the competition.