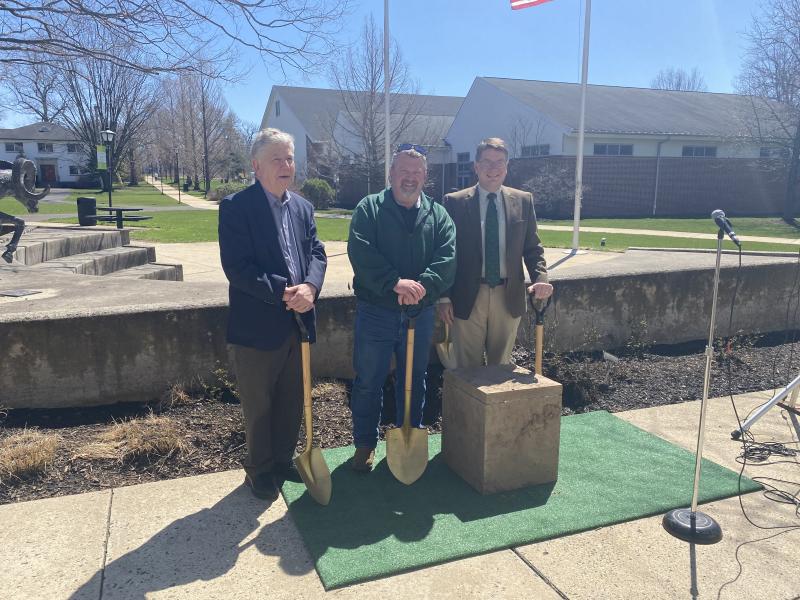 On Friday, April 8 at 12:30 p.m. on Delaware Valley University's (DelVal) campus in the Student Center Courtyard, the University unveiled a time capsule that was buried in 1997 in celebration of DelVal's centennial.

The time capsule has been underground for 25 years, and DelVal was thrilled to unveil the items after celebrating its 125th anniversary.

At the event, President, Dr. Benjamin Rusiloski, spoke about the significance of the unveiling and the importance of tradition throughout the University's history. "I certainly can remember when this time capsule was buried because I was here 25 years ago when we celebrated our centennial. Today is part of a tradition, and traditions are very important for me here at DelVal," Dr. Rusiloski said.

"I often tell people when I speak, that while DelVal has six core values, for me there is a seventh, and that seventh is respecting and honoring tradition. This is one of those days where we can look back at how we started, where we began, and go back just 25 years and the work that was being done to carry us forward to today. I hope that as we look forward today, and as we reflect on the past, we recognize that as we move forward as one learning community, that each and every day we plant the seeds for the future," said Dr. Rusiloski just before the unveiling of the time capsule's items.

Library Director, Peter Kupersmith, spoke at the event as well as he played a significant role in the burial of the time capsule. Kupersmith explained the history of time capsules, dating back to 1876. "What was interesting about primitive time capsules, is that the idea was to show a snapshot of what daily life was like at a community or at a school. What they introduced that was new, was a letter to the future, and the best wishes for what will happen and prognostics about what the future was going to be like," Kupersmith said.

"What we've done here today is we've created a shared future. We're sending a message to future students that we're going to be around 25 years from now. It's a message to posterity to those who come after us that we have a duty to take what we've inherited from our predecessors and to be good stewards and pass it on so this can all continue. it's a way of saying we have a future together," Kupersmith said at the unveiling.

At the event, Kupersmith also read a letter that he placed in the time capsule 25 years ago, and in it were reflections of what the future of DelVal, especially the library, might be like. As each item was unveiled by Hinderliter '98, attendees of the event including students, faculty, and staff reminisced about the past, reflected on the growth of the University to today, and imagined DelVal in another 25 years. The University plans to bury another time capsule that will be unveiled for the University's 150th anniversary.