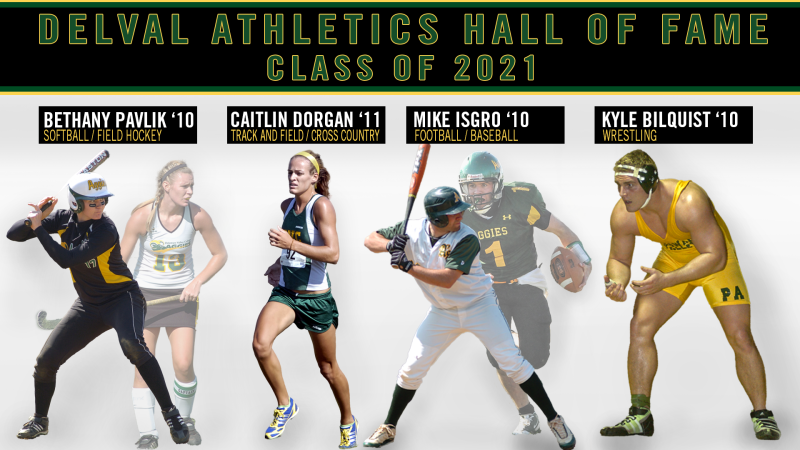 The four new inductees will be enshrined at a Hall of Fame Ceremony on Thursday, May 19 at 6:00 p.m. in the Life Sciences Building on DelVal’s campus.

To register for the event and reserve your spot, please sign up using this link: DelVal Athletics Hall of Fame (touchnet.net). All reservations must be made in advance – no tickets will be available at the door.

The 2021 Hall of Fame induction was delayed due to the COVID-19 pandemic, but the class itself is nonetheless deserving. The 2022 Hall of Fame class will be enshrined during fall semester of 2022. The four student-athletes being inducted this year combined for four All-American honors, two Mid-American Conference (MAC) Rookie of the Year accolades, three MAC Player of the Year nods, six National Championship appearances, and features three dual-sport athletes!

Bilquist ’10 shined as the heavyweight on one of the best wrestling teams in Division III during his four-year career. The Aggies claimed four straight Midwest Regional Championship titles and finished fifth overall at the National Championship tournament in 2008, 2009, and 2010. The squad posted a 65-9-2 dual mark during Bilquist’s ‘10 four seasons.

Named team captain his senior year, Bilquist ‘10 qualified for nationals all four years during his time at DelVal and was the NCAA Midwest Regional Champion three times. The only time he did not win the regional championship, his freshman year, he took runner-up honors. Additionally, he was a three-time All-American that claimed fifth place his sophomore season and finished fourth overall as a junior, and again as a senior. He is one of five Aggie wrestlers in program history to earn three All-American titles.

By the time he graduated, Bilquist ’10 was the all-time leader in wins and 10th all-time in winning-percentage in DelVal wrestling history with an overall record of 129-20.

(Dorgan) Salamon ’11 etched her name in DelVal Athletics history as the most decorated cross country athlete, and one of the top track and field contributors in DelVal’s history. She was a four-year standout in both sports and served as a team captain her junior and senior years. Known best for her distance running, (Dorgan) Salamon ‘11 was a four-time all-conference honoree and became the first DelVal cross country athlete to win the MAC Championship. She did so in her senior season, on her home course, to cap a run of seven consecutive invitational titles that year. She took home MAC Runner of the Year honors that season and advanced to the regional championships where she would finish second overall after a photo finish. The second place showing earned her a second consecutive trip to the NCAA Division III Championships where she placed 28 overall, out of nearly 300 competitors, with a time of 21 minutes, 40.8 seconds in the six-kilometer race, and gave DelVal its first cross country All-American.

In 2009, (Dorgan) Salamon ‘11 finished fourth overall at the regional tournament to make her first appearance at nationals where she finished 62 overall with a mark of 23 minutes, 14.9 seconds.

In track and field, (Dorgan) Salamon ‘11collected six first-team and two second-team all-conference accolades. In outdoor track, she earned first-team nods in the women’s 5K three years in a row and took home second team honors in the 1,500-meter in her senior season. During the 2010 indoor season, she earned another first-team nod in the 5K and was a two-time all-MAC first-teamer in women’s one-mile run.

Isgro ‘10 was another dual-sport athlete that excelled on the gridiron and the diamond as a prominent contributor for the Aggies. For the DelVal baseball team he served as Captain his junior and senior season and was named to four all-MAC Freedom teams in his career. From 2008-2010 he earned all-conference first team honors as a fielder/player, and in 2008, took home second team all-conference accolades for his role as a pitcher as well. In his four years, he hit 20 home runs and racked up 137 RBIs, the most by any player in program history. He ranks fourth all-time in triples (13) and fifth all-time in doubles (32) and hits (182). From the rubber, he threw 137 strikeouts and recorded 13 wins.

In 2010 Isgro ‘10 put together one of the best hitting seasons in program history with a .467 average, 63 hits, 13 home runs, 55 RBI, and 42 runs scored – all of which ranks inside the top-10 in single-season marks. Isgro ’10 helped the 2008 team reach the MAC Freedom playoffs and finish runner-up at the ECAC South Region Tournament, and helped the squad reach the ECAC playoffs again the following year.

As the starting quarterback for the Aggie football team, Isgro ‘10 again served as Captain for both his junior and senior seasons. In 2008, he was named the MAC Offensive Player of the Year and garnished all-region accolades. He finished his career with two all-MAC first team nods. Isgro helped lead the program to two MAC Championships and finished as the all-time leader in career completion percentage with a mark of 55.9%. He finished second all-time in completions (610), yards (7,336), touchdowns (61), and total offense (8,621 yards). A dual threat quarterback, Isgro totaled 7,336 passing yards with 61 touchdowns through the air and added 1,285 rushing yards and another 12 scores on the ground.

Isgro ’10 continues to be a key member of the DelVal football program as he is in his seventh year on the coaching staff and currently serves as Offensive Coordinator, Running Backs Coach, and Recruiting Coordinator.

Another dual sport athlete, (Pavlik) Patterson ‘10, who excelled as a member of the field hockey and softball teams, completes the 2021 Hall of Fame class.

On the field hockey field, she was a four-year starter and named Captain prior to her senior season. She was named the MAC Rookie of the year in 2006 and capped her career with Player of the Year honors in 2009. She made three all-conference teams, twice as a second teamer, and once as a first teamer. Pavlik finished her career as the program’s all-time leader in assists with 28, and second all-time in goals (48) and points (124) – all marks that still stand today. Her 11 assists in a season that included a five-goal, 11-point performance in one game, also still rank first overall.

On the diamond, (Pavlik) Patterson ’10 was a two-year team captain and earned three all-conference nods including two first team honors in 2007 and 2008. She still holds program records for all-time career home runs (19) and runs batted in (98) and graduated as the leader in single-season home runs with eight. Her 140 career hits ranks third all-time and her .385 career batting average was fourth best when she graduated and ranks seventh now.

She was a member of three MAC Freedom playoff teams including the 2008 squad that had the best finish in program history with a runner-up showing. Off the field, she made three MAC All-Academic teams, and two All-Area and All-District academic teams.

To join in this year’s festivities and honor our four new Hall of Famers, please visit DelVal Athletics Hall of Fame (touchnet.net) and reserve your spot by Friday, May 6. All reservations must be made in advance – no tickets will be available at the door.