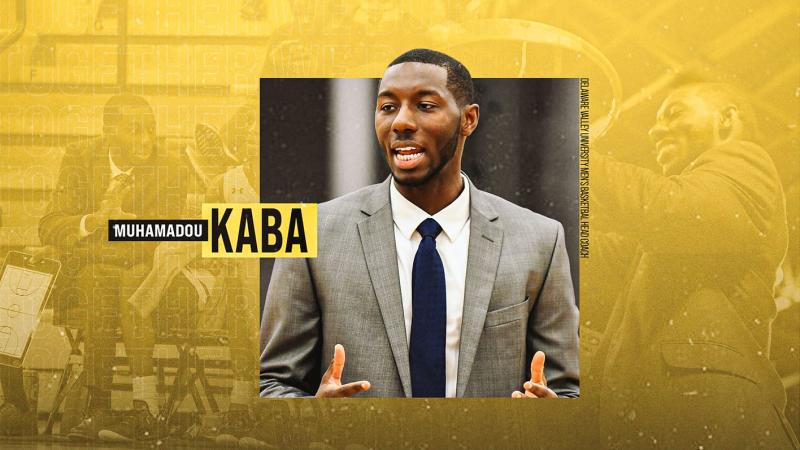 Delaware Valley University and Director of Athletics Dave Duda announced Muhamadou Kaba as the Aggies new head men's basketball coach on Monday, succeeding Mark Seidenburg who announced his resignation after the 2020-21 campaign to pursue the same position at Wilson College.

"I was humbled by the interest in this position. The committee compiled a set of characteristics for the leadership of the men's basketball program and Coach Kaba checked every box," said Duda. "He will be a major presence on the local recruiting scene, within our department, and among our campus community. I look forward to helping him pursue all his lofty goals for the program."

Kaba, a 2015 graduate of East Stroudsburg, will aim to get DelVal back to the MAC Freedom playoffs and continue a standard of winning. There was no traditional conference tournament this season due to the condensed schedule. The Aggies finished the year 5-5 overall, and 3-3 in league play, including a win over Widener University in the MAC Freedom – Commonwealth Crossover Challenge to end the season.

"I would like to thank Dave Duda, Dr. April Vari, and the entire committee for selecting me to become the next head men's basketball coach at Delaware Valley," said Kaba. "I'm fortunate to be joining such a unified athletic department and a community that is unwavering in their support. There is a tremendous amount of potential here and I am excited about how far this program can go."

Kaba was named to the 2017-18 Under Armour National Association of Basketball Coaches (NABC) "30-Under-30" list in the spring of 2018, a nationally renowned list that recognizes rising young coaches in men's college basketball. He was one of just six Division II coaches to be recognized.

That honor came after Kaba helped guide the Warriors to their third PSAC championship in the last seven years, and their first NCAA DII Atlantic Region title in program history. ESU finished with a final record of 27-6, including an 18-4 mark against PSAC competition.

In addition to his on-court coaching duties, Kaba was the program's recruiting coordinator, academic liaison to the academic coordinator, and travel coordinator. An active member on campus, he also served on the diversity and inclusion committee and was recently featured in the department's "Call To Action Webinar Series."

Kaba first joined the Warriors' coaching staff as a graduate assistant in 2016-17. As an undergrad, Kaba was a four-year letterwinner for the Warriors from 2011-15 and a member of two PSAC championship teams, as a redshirt freshman in 2012 and a redshirt junior in 2014. He also played on three straight DII tournament teams (2012-14) and four PSAC Final Four teams. The 2014 team reached the Atlantic Regional final and finished with a 30-2 record.

As a guard, Kaba played in 113 games for the Warriors, contributing 287 points and 227 rebounds. He was a co-recipient of ESU's Coaches Award as a senior, and served as a team co-captain and Student-Athlete Advisory Committee representative.

A mathematics major, Kaba graduated with a bachelor's degree in spring 2015, and earned a master's degree in exercise science from ESU in the spring of 2018. A native of East Orange, N.J., he was an eighth-grade math teacher at East Orange STEM Academy during the 2015-16 academic year.

Kaba expressed his appreciation for all that the Warriors community gave to him, "I am so grateful for my time at ESU with Coach Wilson, our staff, and the players who have helped prepare me for this moment and I cannot wait to get to work!"