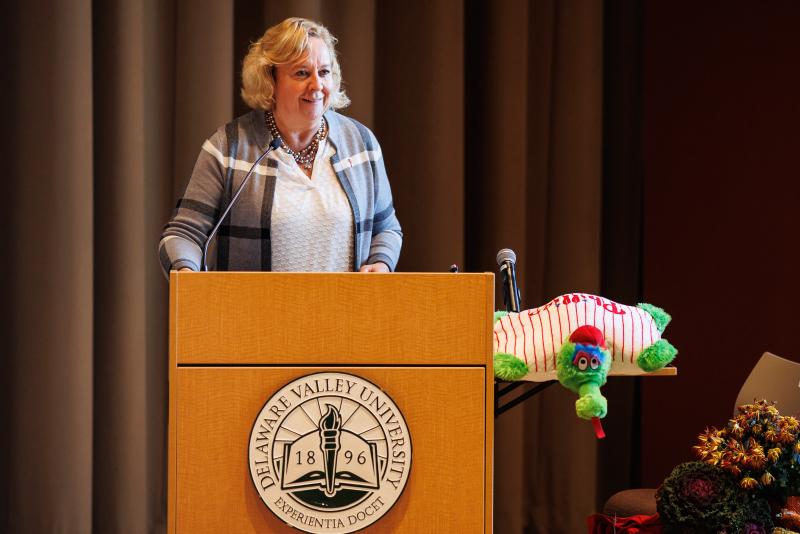 Students networked with Kathy Killian, vice president of administration for the Phillies, at DelVal’s Watson-Executive-in-Residence program.

On Nov.11, Kathy Killian, vice president of administration for the Philadelphia Phillies, spent the day on campus as part of Delaware Valley University’s Watson-Executive-in-Residence (WEIR) program. DelVal students gathered in the Life Sciences Building auditorium for Killian’s presentation. Students asked questions, networked and interacted with Killian during the visit.

Founded by Dr. Thomas Watson ’57, the WEIR program brings real-world business executives to campus to share candid career advice with students. The program also awards a scholarship in honor of each executive.

“There’s something for everyone here,” said Killian.

Killian has been a member of the Phillies organization since 1985. She moved into her current position in 2018. As a catalyst for the preservation and development of the organization's culture, her responsibilities include assisting in the annual performance review process, compensation setting, and workforce development. As a business partner for management, she continues to develop the club's diversity and inclusion initiatives and opportunities, as well as oversee employee engagement, employee recognition, employee food services, a program for high school students, and other special projects.

Killian spoke about her passion for her position as a woman in leadership, the importance of inclusion and building relationships, and the cordial relationship that the team has built with its employees, audience and community.

“As far as community service, we try to ensure that everyone in the company is involved, including our partners,” said Killian. “People want to be acknowledged and valued. And, they need our help. As an organization that generates a lot of money and jobs, and is a platform for doing good, the commitment to the organization is unbelievable.”

In the beginning of the lecture, Killian asked the students about their experiences as students at DelVal. Students voiced their thoughts about what they love about being a DelVal student and what comes to mind when they think about the Phillies.

“Who would be willing to share just one word of how you feel when you enter the ballpark?” asked Killian.

Killian pointed out that coincidentally the theme for the Phillies this year is “Welcome Home.”

Killian took questions after the lecture. Students said they left “inspired and interested in the company.”

At the end of the visit, Killian gifted each member of the audience two tickets to a Phillies game. 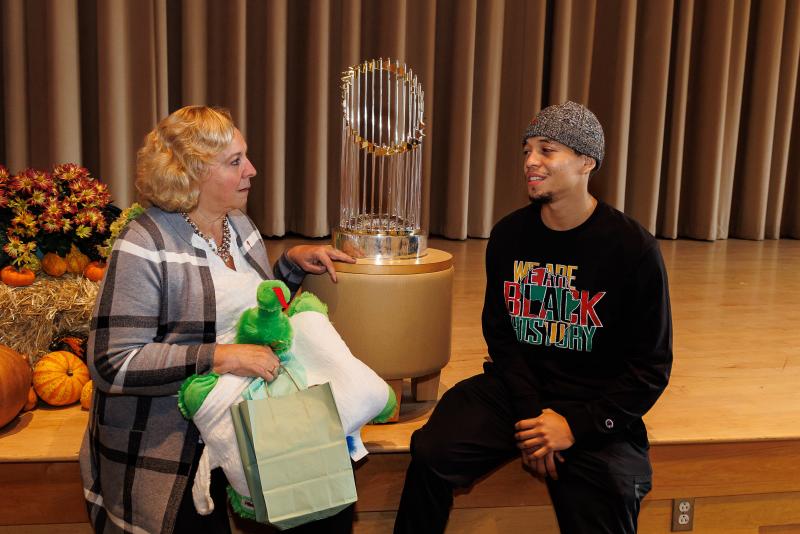