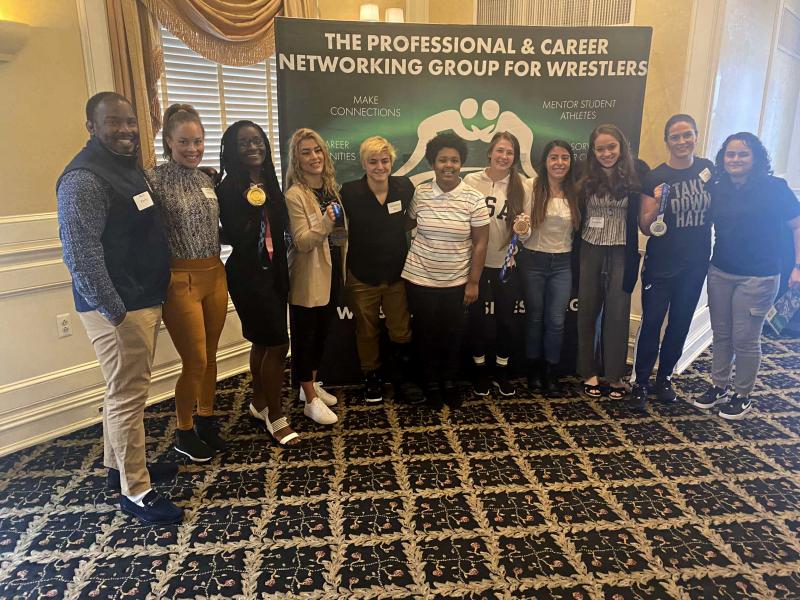 The DelVal Women's Wrestling Team talked with the Olympians and Team USA National Women’s Coach Terry Steiner at an event hosted by the Wrestlers in Business Network.

DelVal students asked questions and discussed women's wrestling with the Olympians and their coach at the breakfast. The Wrestlers in Business Network Philly Chapter provided DelVal students with the opportunity to speak with Olympic medalists Adeline Gray, Helen Maroulis, Tamyra Mensah-Stock and Sarah Hildebrandt.

The four female Olympians and the coach rotated to different tables and took questions from students. DelVal students also spoke with the medalists one-on-one and listened to a panel discussion where the Olympians answered 10 questions.

Adeline Gray is a five-time Senior World Champion. Gray also speaks out against sexism and promotes equal recognition and participation in Olympic and collegiate level wrestling.

Helen Maroulis is the first U.S. woman to win an Olympic wrestling gold medal. She is also a 2015 World Champion.

Sarah Hildebrandt is a two-time silver medalist at the World Wrestling Championships. Hildebrandt also won Bronze at the 2020 Summer Olympics in Tokyo, Japan.

"I learned a lot about how to improve my wrestling and take myself to the next step of competing with those who ‘should beat me’ or who had beaten me in the past," said Bridgette Schoultz '23. "It was pretty cool speaking with Coach Steiner because he has been dedicating his time to growing female wrestling and helping women advance to new levels."

“I had the opportunity to see some of my friends and former teammates again,” said Jaynes. “Seeing my DelVal team meet them, listen, and ask them questions was incredibly fulfilling.”