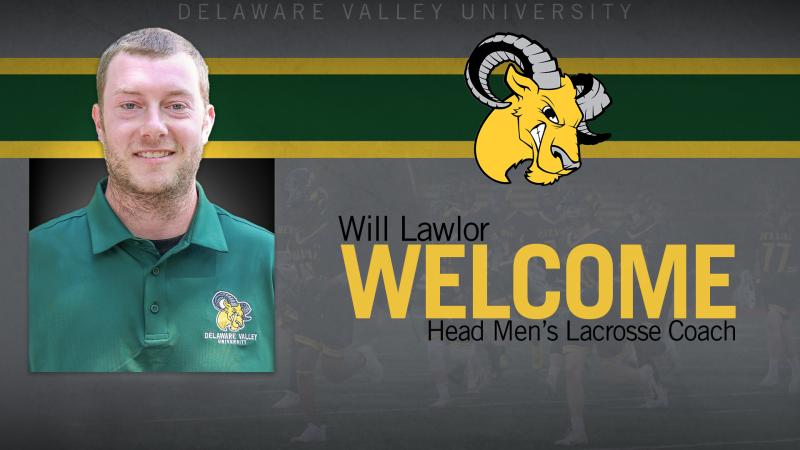 "Will brings tremendous energy and vision to our men's lacrosse program," said Duda. "He has clear parameters and principles for directing a program and I'm confident he will focus on the total development of each student-athlete with respect to our University's core values. We welcome Will and look forward to working with him in pursuit of the lofty goals he's set for the DelVal men's lacrosse team."

While with the Dutchmen, Lawlor worked under prominent lacrosse coach John Haus where he helped bring in 36 recruits in two seasons and developed four all-conference players. He helped improve the team from two wins in 2020 to eight victories in 2022.

Prior to his time at Lebanon Valley, Lawlor spent two seasons as the head coach of the Northern Arizona University Lumberjacks in the Men's College Lacrosse Association (MCLA). In 2019, Lawlor led the program to the SLC-II Championship and MCLA Nationals for the first time ever.

Lawlor got his start in coaching at the high school level, spending one year at both Pope John Paul II and Lower Merion, before making the leap to the college ranks. He was hired as the offensive coordinator and face-off coach at Alvernia University where he had a stint as interim head coach in the summer of 2017. He departed from the Golden Wolves for an opportunity to coach at the Division I level as offensive coordinator and face-off coach at the University of Arizona.

A native of St. David's, Pennsylvania, Lawlor graduated from Rosemont College in 2015 with a bachelor of arts degree in communications after transferring from Ohio Wesleyan. He was a two-year starter for the Ravens and set single-game program records for assists (7) and points (9), and earned the Colonial States Athletic Conference (CSAC) Sportsmanship Award in 2014. Lawlor went to high school and competed at perennial state powerhouse Radnor High School.

"I would like to thank Director of Athletics, Dave Duda, and the DelVal selection committee for this opportunity," said Lawlor. "This is a dream come true. I believe my prior coaching experiences and strong mentors along the way have prepared me to lead DelVal's lacrosse program and take it to the next level. I cannot wait to get started."

Lawlor is the third head coach in the young history of the University's men's lacrosse program. Last season, the squad posted a 6-11 record including a 3-5 mark in MAC Freedom play. Lawlor will be on the recruiting trail the rest of the summer before welcoming student-athletes back to campus in August.