Salome Thomas-EL, an acclaimed educator, author, and head of Thomas Edison Charter School in Wilmington, will receive an honorary degree and deliver the Commencement address at Delaware Valley University on Saturday, May 18. Commencement will be held on the Quad at 10:30 a.m. The University will also award an honorary degree to the Honorable Dominic M. Cermele, a longtime public servant and civic leader.

“We look forward to welcoming Salome Thomas-EL to campus,” said DelVal President Dr. Maria Gallo. “He shares Delaware Valley University’s student-centered philosophy and has dedicated his career to making sure every student he encounters has a chance to thrive.”

DelVal will award Thomas-EL with an honorary Doctor of Humane Letters at the ceremony for his work to help students and educators.

Judge Cermele will receive an honorary Doctor of Letters for his service to the community. 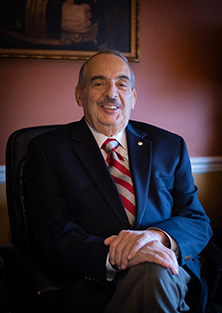 He served the City of Philadelphia in numerous capacities for decades. He was a Traffic Court judge, deputy finance director for the city, and executive director of the Office of Administrative Review, and is a former president of Girard College. In addition to membership on a number of governmental boards and authorities, he was active in the community and civic organizations throughout Philadelphia. In all of those capacities, he worked to serve those in need - the at-risk members of his community. Judge Cermele attended Drexel University and Cheyney State College.

“Each of these individuals epitomizes the University's core values; each is a fitting and worthy recipient of a DelVal honorary degree,” said Dr. Gallo.