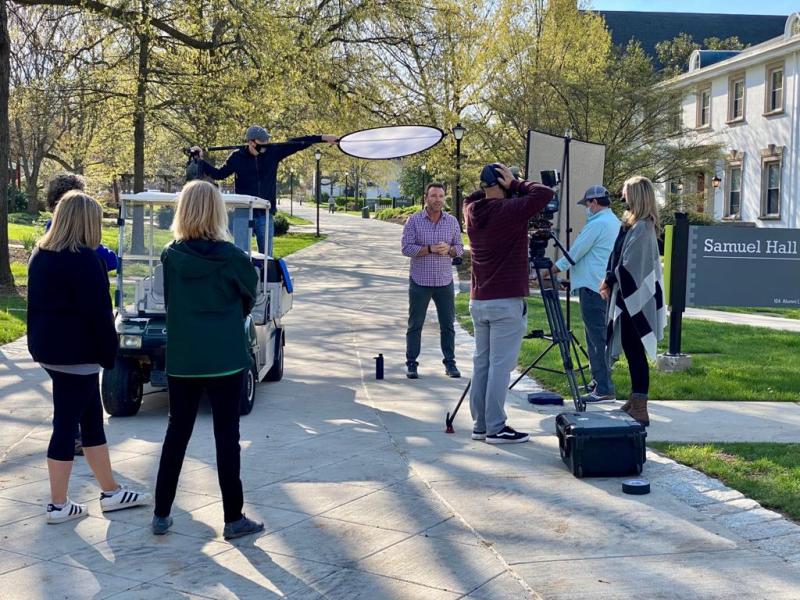 The University is highlighted in an episode of "The College Tour," which is hosted by Alex Boylan, of "The Amazing Race."

Delaware Valley University, in Bucks County, Pennsylvania, is featured in an episode of "The College Tour," a new, national TV series. The 30-minute episode featuring DelVal is out now and, will be screened at upcoming events during the academic year. Viewers can watch the full episode on DelVal's website now. The episode will be coming to streaming services like Amazon and GoogleTV on Aug. 30.

Hosted by Alex Boylan, winner of "The Amazing Race," the series tells the stories of colleges and universities around the world. Each episode focuses on a single college or university and covers campus life, academics, housing, sports, activities, and much more.

"The episode really captures the student experience at Delaware Valley University," said DelVal Interim President Dr. Benjamin Rusiloski. "This year, we're celebrating 125 years of experiential learning. Through our award-winning Experience360 Program, 100 percent of our undergraduate students gain relevant, real-world experiences before graduation. E360 is so much more than a typical internship program. This episode really shows the kinds of experiences our students are participating in and, what makes a DelVal education so powerful."

Emmy-nominated and award-winning TV producers visited the DelVal campus in April 2021 to film 10 students who shared their stories about what it's truly like to be an Aggie.

"As a student at this school you won't just be in a lecture hall, you'll be out in the field that you choose to study," said Kai Allen '24, a biology major who is featured in the episode.

Featured in the episode (in order of appearance) are:

How to Watch the Episode:
The episode of the TV series, "The College Tour," featuring Delaware Valley University is out now! Viewers can watch the full episode now on DelVal's website at www.delval.edu/thecollegetour. "The College Tour" will also begin streaming on Amazon, IMDbTV, GoogleTV, PlayStation and XBOX and more on Aug. 30.