What is the Joro Spider? DelVal Professor of Biology Separates Fact from Fiction on KYW Newsradio Podcast 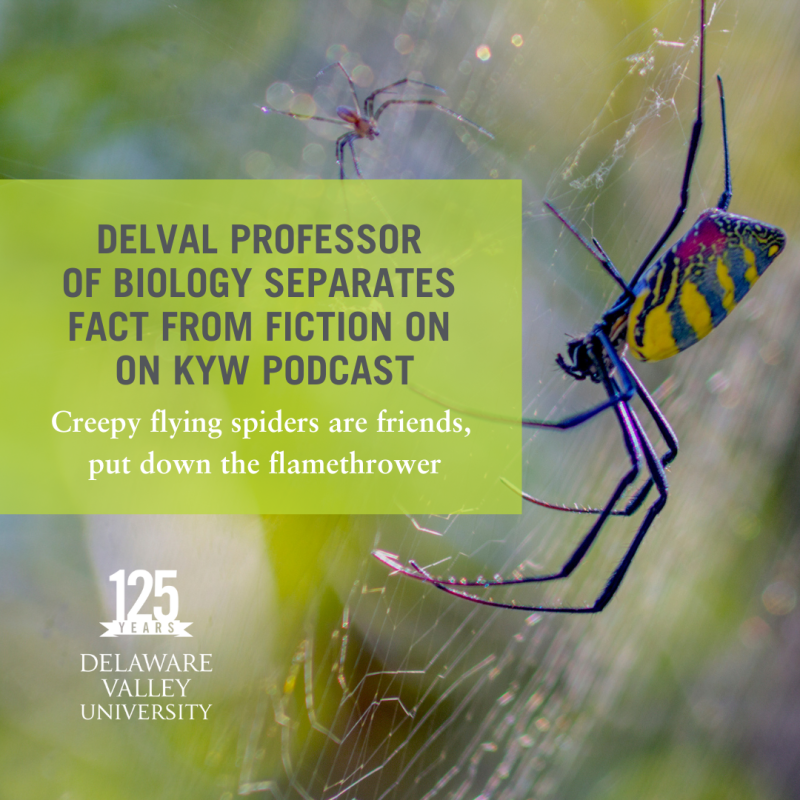 There has been conversation about this species of spider as it currently resides on the southeast region of the U.S., and many are wondering about its potential impact on our ecosystem. Dr. Tipping discusses the spider to separate fact from fiction.

“The Joro spider’s normal distribution includes Japan, and other parts of southeast Asia. Japan is mainly temperate, which is their native range. They are also currently distributed in parts of northeast Georgia and then into South Carolina and I wouldn’t be surprised if there have been sightings of these spiders all throughout that region,” Dr. Tipping explains.

Leone asks Dr. Tipping about the potential impact of the Joro spider on our ecosystem, indicating that throughout the U.S. there has been talk about the species wreaking havoc on our environment. “For the most part, it’s sensationalism that’s going on,” Dr. Tipping refers.

“I understand that people don’t like spiders, and I hesitate to say that the Joro spider will have no impact on our ecosystem. When I think about where these spiders occur and their life history, there could potentially be an impact on the similar native species that we have here. If you consider it in terms of ecological thought however, I don’t really see them having a major impact,” Dr. Tipping indicates.

“There have been proclamations that this spider could be all over the east coast. Is this a spider we’re going to see in the Delaware Valley?” asks Leone. “I would say, not in our lifetime. Potentially they could blow maybe north a bit in the spring, but I don’t see them overwhelming and filling the forest or on everyone’s back porch. But, I always try to think, never say never, because sometimes life does things we never predict,” Dr. Tipping responds.

While we can’t predict the future, with Dr. Tipping’s knowledge and expertise, it seems the Joro spider is a fascinating species that we need not fear.