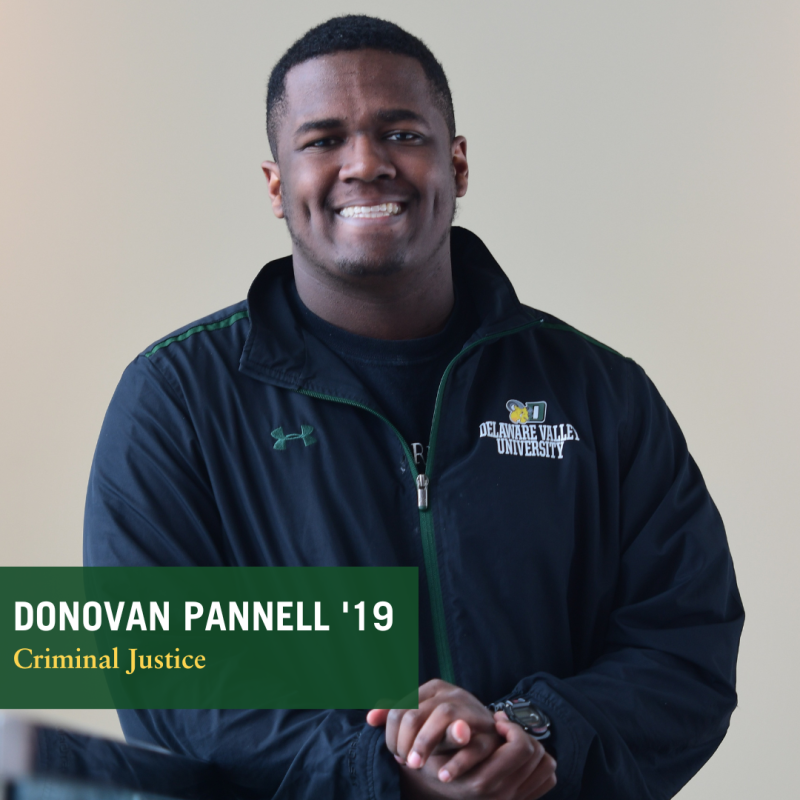 Donovan Pannell ’19, also known as Donny, felt right at home after meeting with football coaches and being welcomed to the campus community.

Pannell began his DelVal journey as a business major but changed his major to criminal justice. He took a class with Dr. Christi Smith and immediately became fascinated with the major. He was also a Rambassador and resident assistant (RA), and was involved in a little bit of everything at DelVal. He even worked at the IT Help Desk. He says his involvement made him a “more universal person on campus.”

“I loved trying new things and meeting new people,” said Pannell. “I had friends in so many different walks of life.”

He was awarded the above and beyond Resident Assistant of the Year Award. He was selected as a student member of two committees, one was to form the expressive rights policy on campus and the other was a search committee for the new dean of the School of Business and Humanities. He was also voted as homecoming king in his senior year! While being involved in numerous ways, Pannell took an internship at a law firm in Doylestown in his senior year.

“The relationships I had with my professors and other members of the faculty were the biggest reasons why I felt at home at DelVal,” said Pannell. “The universal learning points that I gained from each experience allowed me to build my own unique approach to problems and has really helped me in the professional world.”

Currently, Pannell works in Operational IT for Client Network Services, Inc. This field combines his interest in criminal justice with the healthcare field, as he deals with government documents daily. He also coaches football at Catoctin High School, and his former RA experience has certainly helped him with relationship building and coaching.

“Some of the best experiences I ever had on campus were when I would go to school events,” said Pannell. “Approach each day as an opportunity to try or meet someone new and you will have the time of your life.”